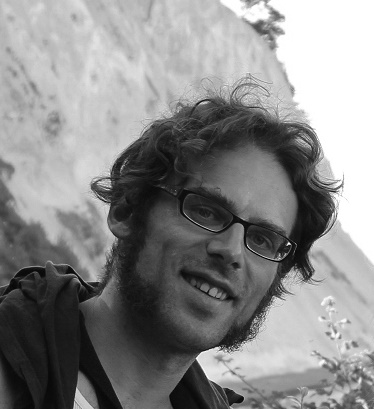 Individual heterogeneity in dispersal as a driver of spatial ecological dynamics

Habitat fragmentation imposes strong constraints on metapopulation dynamics and gene flow. Therefore, survival of populations largely depends on their capacity of individuals to disperse among patches. Dispersal is considered a key life-history trait which is ultimately tied to the cost and risks associated with this movement. The rescuing effect of dispersal is well document from a population ecological perspective and is typically considered to be the result of propagule load, i.e. the number of emigrating and immigrating individuals. Dispersing individuals do, however, likely differ phenotypically from philopatric individuals, and such heterogeneity is expected to have strong impact on the emerging metapopulation dynamics.

As a first step to understand the causes and consequences of individual heterogeneity in dispersal, I’am currently testing how relevant environmental conditions and maternal effects affect dispersal rates and correlates with other traits like fecundity, survival and body size (syndromes).

The two-spotted spider mite Tetranychus urticae is used as a model species. The species has two modes of dispersal: one ambulatory or walking mode for short distances and one similar to spider ballooning or passively dispersing mode for covering longer distances through the air. My first results suggest that (possible) maternal effects are overruled when conditions improve, and individuals that use arial dispersal grow slower than philopatric ones. In subesquent experiments the two dispersal phenotypes (dispersive versus philopatric) will be placed in experimental metapopulation to investigated the consequences of theses phenotypes on spatial population dynamics. Moreover, I will use RNA-seq to look for differences in expersion levels, and mutations (SNPs) of dispersers and philopatric individuals.

Although the focus of my PhD is studinyng dispersal in experimental metapopulations, I am also involved in a small side project where I use radiotracking to investigate how bumblebee movement is affected by competition and landscape structure in the field. 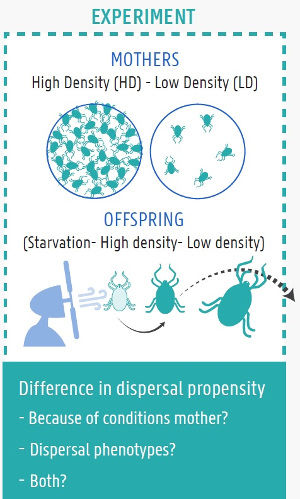 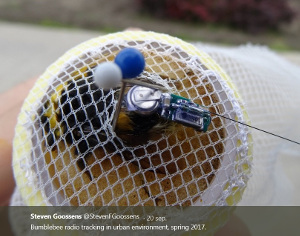 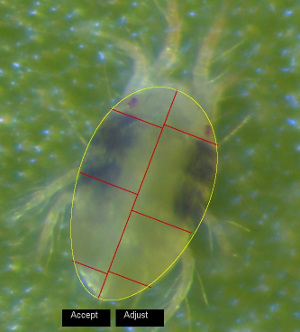